It has been a week since I  returned from a wonderful trip though admittedly it didn’t happen without some drama both before and after the event. Two days before the cruise we got a called from the cruise liner asking if the mother’s wouldn’t mind giving up their cabins which had a balcony for another. As an incentive to do so we would be given half the cruise price back in ship credit and whatever that was not spent would be refunded back to us with a cheque. My mother agreed to it despite losing the balcony as she had no real money to spend while one the cruise. The Eagle’s mother also agreed to it a first but  chucked a hissy fit after viewing the replacement room claiming it to be too small. The room was bigger than mine and the Eagles and they pretty much had a larger balcony right under the captain’s area if they left the room and turned right.

She spent over an hour on the phone arguing with the cruise liner claiming that while she had told me yes that she had not agreed to it personally to them, as they had also called her and promised to call her back and then didn’t. She eventually left the ship losing her share of half the cruise price and promising to sue them. Apparently she has already given power of attorney to her brother, who is a bit of a conspiracy theorist.

It was probably for the best as I don’t think either my mother or even the Eagle would have enjoyed themselves all that much with her there. I probably wouldn’t have either but not because of her but how the other two were going with her being there.  According to the Eagle he thought that she was trying to find a way to back out of it anyway as she is claustrophobic and agoraphobic and the change gave her a reason to do so without it seeming like that was the real reason though she did inform the cruise liner of those issues when she was on the phone to them. She also pretty much took credit for the cruise in the first place when it was an idea that I put to her and that I fully organised.

Well any who. The cruise was great despite both my mother and the Eagle having sea sickness for the first couple of days, me losing my Fit Bit and tripping over in Sydney and losing the sapphire from my engagement ring. We found the stone however and will get it repaired but alas I am now without my ring. We drank, we ate, we made friends with other travellers and members of the crew in particular a wait staff at dinner and a couple of servers in the café. My mother was particularly taken with one of waiters at dinner. We saw several of the shows and my anxiety and headaches behaved themselves while on board.

Sydney was beautiful, but then it is hard for Sydney not to be, can you tell that I love Sydney. Airlie Beach was really pretty, despite the fact that we could not swim there due to jelly fish and crocodiles. The people were really friendly and my mother got a new hat, which she really didn’t want but needed, and a new pair of shoes, which she actually did need as the ones she were wearing were falling apart. Cairns was wonderful as we caught up with the Eagle’s brother and niece who took us up to Kuranda and Barron Falls. We had a lovely day of site seeing and family time. Port Douglas was a little disappointing as the Eagle didn’t get off the ship and me and mum went to an overpriced Wildlife Habitat that was in the process of being renovated where we fed kangaroos and wallabies and that was about it. 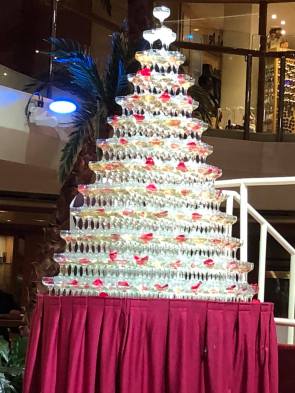 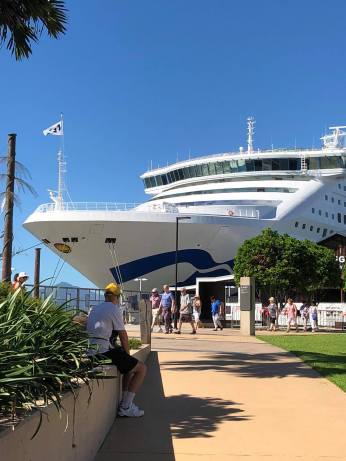 Mum was sick on the last day which was the rockiest day of the whole trip. We get home only to have my step-father, who was looking after the dogs and the house, proclaim that my dog needs to be ‘put out of her misery’ as she has allergies and bit herself so bad that she has lost a large amount of fur and the area is now infected. He also said that the house stinks but did no cleaning what so ever, did some gardening in which he got his mistress to help who pulled out most of my mother’s plants and then gave her boxes of chocolate that were given to my mother as birthday gifts and used up most of the petrol in my mother’s car and didn’t refuel. Oh and my sister is coming down off what she is on, has been listening to the mistress and is making threats of violence and is once again reverted to name calling that now includes me. She has left though only after we called the police on her once again.

So It back to the grind to me and the stress and anxiety of full-time work  in which I will be moving to another department very shortly though on the good side there are a few familiar faces in the new department, planning a wedding single handily with no money and trying to diet once more despite the last one not really working. Oh the Joy….

Song Of The Day