Alrighty let’s get back into this. Since I last posted I have had a bit of time off in which I did absolutely nothing but was hoping to at least go down to Melbourne to visit my family there. Didn’t happen but it gave me a chance, I guess, to binge watch a couple of shows, mainly anime.

First off I wouldn’t call myself a binge-watcher but my BF has pointed out that I have been known to watch multiple episodes of television of the one show in order. However these shows are usually shows that I have already watched before and I would count it more as a re-watch than an initial binge watch and I am really only watching the show as a intro for my BF as he had not watched it before. Actually the more that I think out it I probably binge watch more than I think that I have without realising that I have been doing it.

Well any who what I have binged watched over this most recent break:

· Mr Robot – iTunes – Wonderful show and I adore Christian Slater so that made it even better.

· Beyond the Boundary – Netflix – A pretty good anime

· Toradora! – Netflix – Started it a while ago and then got distracted so I returned to it and watched most of it but still haven’t completed it. Pretty good anime.

· The Flash – combination of iTunes and Netflix – re-watching season 1 with my niece and we have just started season 2. Not sure what I am going to do with the crossover episode with Arrow as I refuse to let her watch Arrow, she is only 8 after all and ever Flash can be a little too mature for her though she has watched MA rated stuff before.

I have also started watching Merlin and have given The 100 a go which I might pick up. Also watched the first episode/s of the Shannara Chronicles last night which I did enjoy. I might also re-watch Daredevil in preparation for the new season. Of course this all hinges on when I get my internet back at home as our modem decided to die over the weekend. I am totally relying on Wi-Fi hotspots and have also occasionally using my mobile in the same capacity.

Song of the Day

I am not the most focused today so if I ramble or go off topic, not that I really know what topic I am on today, it is because I have forgotten to take my medication for the last two days. Yesterday it most likely because of the dentist appointment this morning it more because I got distracted with other things and by other things I mean iTunes and my computer in general.

I sort kinda feel like Franken Stein from one of my favourite animes, Soul Eater, which I have been re-watching over the last couple of weeks in between bouts of simulcast shows on Animelab, Doctor Who, The Flash and Arrow and general DC/WB animated TV and movies. I think I will go into my love of DC in another post though.

Now back to Franken and Soul Eater in general. If you are a fan of anime and haven’t seen Soul Eater than shame on you as it is an excellent show except for maybe the end, but that is my opinion and I tend to think most anime series endings are not very good. The manga series does it better I believe but I haven’t read it all, I started too but because it sticks to the manga for the first half of the series and then deviates I got a little bored. 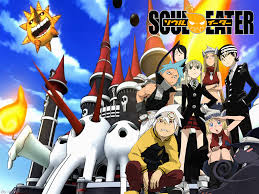 Well any who back to the show. What makes this one unique, not just because of the world itself but the design. It is very Tim Burtonish with a colour scheme of mainly black, white and red. It is set in alternative earth where Franken Stein is a teacher and mad scientist working for the school in Death City, Nevada. The school he works for is the Death Weapon Meister Academy (DWMA). The school is for training humans that are able to turn into weapons and those that can wield them, who are called Meisters. It is run by the Grim Reaper.

Stein, which is what he is mainly called in the show, is overcome by the madness of the main antagonist of the show, a being called a kishin, which is able to transmit it’s madness all around the world. Stein is not the most stable of characters to begin with in general due to his love of dissecting things and near the end it overcomes him and he becomes erratic, twitchy and manic. That is kind of how I feel today.

Song Of The Day